Veterans can now work directly with the Department of Veterans Affairs to resolve debt collection issues resulting from inappropriate or delayed billing under the Veterans Choice Program. A Community Care Call Center has been set up for veterans experiencing adverse credit reporting or debt collection resulting from inappropriately billed Choice Program claims. Veterans experiencing these problems can call 1-877-881-7618 (7 a.m. to 3 p.m. MDT) for assistance. “As a result of the Veterans Choice Program, community providers have seen thousands of veterans. We continue to work to make the program more veteran-friendly,” said Dr. David Shulkin, undersecretary for health. “There should be no bureaucratic burden that stands in the way of veterans getting care.” The Choice Program, meant to provide veterans living more than 40 miles from a VA hospital with access to care in their communities, has been fraught with problems, including long waits for return calls and difficulty getting appointments. In some instances, contract administrators of the program have not made timely payments. The VA said the new call center will work to resolve instances of improper billing and to assist community care medical providers with delayed payments. VA staff are also trained to work with the medical providers to expunge adverse credit reporting on veterans resulting from delayed payments to providers. VA is urging veterans to continue working with their VA primary care team to obtain necessary health care services regardless of adverse credit reporting or debt collection activity. VA acknowledges that delayed payments and inappropriately billed claims are unacceptable and have caused stress for veterans and providers alike. The call center is the first step in addressing these issues.

Source: Getting to clean claims: Costs start to add up for payers, providers on the first error | Healthcare Payer News

Six Democratic US senators today criticized Comcast and other TV and broadband providers for charging erroneous fees, such as cable modem rental fees billed to customers who bought their own modems. The senators have written a letter to Federal Communications Commission Chairman Tom Wheeler asking the commission to “stop unfair billing practices.” Last year, more than 30 percent of complaints to the FCC about Internet service and 38 percent of complaints about TV service were about billing, wrote Senators Ron Wyden (D-Ore.), Bernie Sanders (D-Vt.), Jeff Merkley (D-Ore.), Al Franken (D-Minn.), Ed Markey (D-Mass.), and Elizabeth Warren (D-Mass.). The senators described Comcast, the nation’s largest cable and broadband company, as a repeat offender. “We are troubled upon hearing complaints of consumers being charged the modem rental fee after they have returned the rented equipment to Comcast or being charged the rental fee having never rented a modem in the first place,” the senators wrote. “Not only are the majority of customers using automatic payment systems and may not personally authorize every erroneous charge, many consumers report having to call and remedy this problem throughout several billing cycles. In fact, customer help boards found online at Comcast’s Help and Support Forum contain complaints about this exact problem.” Comcast increased its monthly modem rental fee from $8 to $10 (in late 2014) “and makes an estimated $275 to $300 million a quarter from these fees,” the letter said. The problem is made worse by lack of competition, the senators wrote. When contacted by Ars today, a Comcast spokesperson noted that “modems are available to consumers at retail, and rental isn’t required for broadband service.” 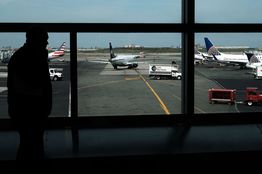 The Port Authority of New York and New Jersey voted Thursday to require a construction company overseeing La Guardia Airport’s redevelopment to pay for an outside “integrity monitor” after it admitted to overbilling at the World Trade Center site. The board of the company, Tishman Construction Corp., is headed by Dan Tishman, who led a panel appointed by New York Gov. Andrew Cuomo to reassess the airport’s design. The company is a subsidiary of AECOM, a major consulting firm. The Port Authority’s board approved on Thursday the monitoring requirement in light of Tishman’s deferred prosecution agreement in December with federal prosecutors in Brooklyn. According to that agreement, Tishman admitted to fraudulently overbilling clients and agreed to pay more than $20 million in restitution and penalties. The company agreed to reimburse the Port Authority more than $400,000 as part of the agreement, according to the agency. MORE ON THE PORT AUTHORITY Port Authority Advances Major Projects March 24, 2016 Port Authority Grapples With Competing Transit Projects March 23, 2016 New York Subway System Can’t Keep Pace With Growing Number of Riders March 23, 2016 Leaks at Hudson Yards Station Rile MTA Officials March 21, 2016 A Tishman spokesman said the company thinks “the monitor is unnecessary because of robust protocols already in place, but will comply with whatever is required by our client.” “There has never been an assertion of billing problems at LGA,” said the spokesman, referring to La Guardia. In a joint venture, Tishman and STV Construction Inc. are managing construction related to La Guardia’s redevelopment. Port Authority Executive Director Patrick Foye said the integrity-monitoring firm would report to the agency’s inspector general, and he described the arrangement as a routine step. “We believe that’s a useful—and ought to be an effective—prophylactic device,” he said. The design panel that Mr. Tishman headed recommended changes to La Guardia’s configuration, including a new, $310 million central hall as part of a replacement of Terminal B. A Cuomo spokeswoman said the Port Authority’s inspector general would hire “independent, outside staff to ensure the integrity of all the work done at La Guardia.” She noted the Tishman-STV joint venture was chosen through a competitive bidding process in 2013, before the airport design panel was created. WE WANT TO HEAR FROM YOU Have something to say about an article in Greater New York? Email us, along with your contact information, at gnyltrs@wsj.com. Letters will be edited for brevity and clarity. Please include your city and state. The monitoring resolution noted that Tishman Construction has “substantial ongoing contracts” with the Port Authority. The agency’s decision to subject Tishman to an outside watchdog comes as Port Authority Chairman John Degnan, the top New Jersey appointee on the agency’s board, has questioned the growing estimates related to overhauling La Guardia. The agency’s official tally of costs for La Guardia’s redevelopment stands at $5.3 billion, exceeding some previous estimates by more than $1 billion. Top New York officials at the agency have disputed the $5.3 billion figure, saying it is misleading because it includes work going back to 2004 and other costs.

Yep, looks like the much herald utility “smart meters,” after only a couple years of usage, are already screwing up. Imagine that! I’ve previously written several columns on the smart meter controversy, dating back to October 2013, cautioning of various issues raised by other communities that switched from the older analog meters to the new digital electronic meters. In addition to safety and privacy concerns, there were also reliability factors involved because the new meters have a tendency to record erroneous information, often resulting in excessive charges to the customer. Now it appears Safford utility ratepayers are encountering the same problems with their new gas meters (“Safford correcting overbilling errors,” Eastern Arizona Courier, Feb. 20, 2016). The article did not indicate if the electric and water smart meters were also experiencing similar malfunctions. Actually, all my utility usage — electric, gas, water — increased substantially, in some cases, nearly doubling the previous month’s billing. Nothing has changed at my home to reflect such a dramatic jump in costs. If I recall correctly, the same company that provided the city with the meters is also the same company that furnishes the monthly billing statistics. This isn’t to suggest there is a definitive conflict of interest situation, but it seems somewhat suspicious that, if the outfit supplying the meters is also the same firm doing the accounting, the chances of billing “errors” could conceivably occur in favor of the meter supplier.

Going green is an enviable goal, but for some people paper is still the better choice for financial statements, according to a new report from the non-profit National Consumer Law Center. Digital is cheaper; it eliminates printing and postage costs. That’s why banks, credit unions and credit card companies are pushing so hard — with bill inserts and on-screen pop-up messages — to get their customers to switch from paper to electronic monthly statements. “Good old paper may be old-fashioned, but it actually has advantages,” said NCLC attorney Chi Chi Wu, who co-authored the report. “It’s much easier to get your mail, open the envelope and look at a statement versus getting an email, remembering to go to the website, enter your password and download the statement and then open it and look at it.” Even computer-savvy people who pay their bills online often prefer paper statements, Wu said. Computers can crash and email can be ignored or overlooked. Paper statements are more likely to be opened.

TORONTO — Health Minister Eric Hoskins complained Wednesday about the billing practices of some Ontario doctors, who he said were taking hundreds of millions of dollars away from home care and other services. “Unpredictable and frankly out of control billing by some doctors is a problem that creates huge income for some doctors, but it leaves less for family doctors,” said Hoskins. “It leaves less for our salaried doctors in community health centres, it squeezes our ability to invest more money in home care and community care, and it robs of us of the capacity to responsibly plan our health care spending each year.” There are no caps on billings by Ontario doctors, “so they effectively set their own salaries,” and at an average of $360,000 a year are the highest paid in Canada, added Hoskins. But the unpredictable billing allows some specialists to earn several times the average, and forces the government to find millions of dollars on top of the $11 billion set aside annually for physician compensation, he said.

Products And Stories To Make Your Life More Chill

neskiracing.wordpress.com/
SMS built on a tradition of excellence
Off The Grid
Blog at WordPress.com.
%d bloggers like this: